After a bloody battle, the Bluefor attacking Elektrozavodsk were rejected. No territory was conquered or lost, but the Redfor gain now the strategic initiative. Galvanized by their victory they will attack soon …

The Blue Coalition attacks Electrozavodsk, important strategical and industrial town in the Chernarus portion controlled by the Red Coalition

It’s no more a matter of skirmish or accidents, it’s the war 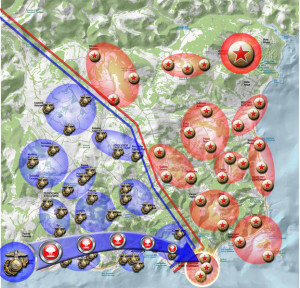 FROM THE CHEDAKI WAR CORRESPONDANT IN UTES: THE BATTLE FOR THE AIRPORT

It has been a bloody day at Utes where yesterday the Chedaki forces, unespectedly have attacked the airport.
A huge battle broke out between Chedaki milita and CDF; the whole island was involved.

Although there were no civilians as the area was recently secured by USMC and Russian peacekeepers. However, the victims are to be expected in big number, expecially in the airport area, among Chedaki, CDF and the peacekeepers.

It looks there was no suprise in the attack and the CDFs were especting the enemy. The raid in the airport was quick, and the counter attack was as fast as the chedaki one.

We’ve reports that armoured forces were involved in the impressive fightings.
Even the small village of Strelka was occupied by a group of chedaki milita that laid a minefield in the town.

More important events are expected to take place in the next future. We’ll keep you informed.