THE BATTLE OF PUSTA, FEBRUARY 9TH

A very hard battle for the control of the three sectors in the area of Pusta, Pusta, Pik Kozlova and Prigorodki.

BLUEFOR task was to defend the thre sectors. Pusta was the first to be conquered by REDFOR, then Pik Kozlova, that was taken back by BLUEFOR after a while, and lastly Prigorodki was captured by REDFOR

At the end of two hours the situation was the following: Pusta and Prigorodki for REDFOR and Pik Kozlova in BLUEFOR hands.

The REDFOR win the battle and the area of Pusta turns red, but BLUEFOR maintain an outpost at Pik Kozlova where a HQ will be placed. A BLUEFOR 5-men squad will be present at Pik Kozlova at the beginning of the next battle, and task of REDFOR will be to destroy the BLUEFOR HQ there. If they don’t and the REDFOR win again 2 sectors to one the next time, they will lose the strategical initiative.

Congrats REDFOR and GG all, great battle, we are looking forward the prosecution of Chernarus operations.

After a calm period, seems that the situation in Chernarus is becoming hot again. The Russian coalition seems rebuilt, reinforcements are now available at the russian base and yesterday intelligence reports affirmed that troops were spotted heading to Sobor region. The arrival is probably planned for the 2rd of February. The Blufor coalition is moving their units to face the attack and defend the territory. We’ll keep you informed on developing of events. 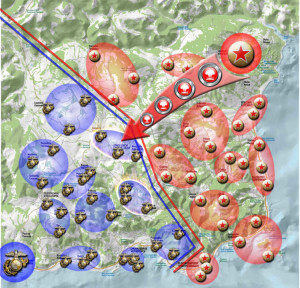 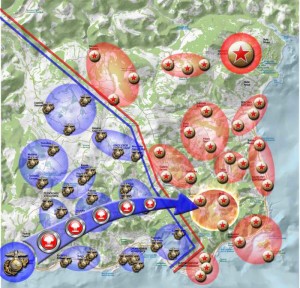