The Russian assault on Mogilevka failed, the Bluefor could hold out against the heavy attacks of the Russian coalition

After that, the Russian offensive lost its strenght, and eventually stopped

The political situation in Chernarus got very confused, and again a truce was agreed for the upcoming Christmas festivities

But the peace is still a dream in the country

After the truce and the reorganization of the two coalitions, the war will resume as harsh as before …

The new Russian-led Coalition attack Mogilevka. After the fragile truce has expired, the war bust out again in Chernarus. Heavy infantry fightings are anticipated in the Mogilewka district and Vyshnoye. We’ll keep you informed on developing of events. 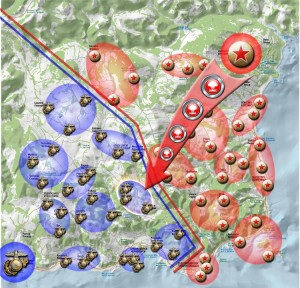 Today is the last day of the truce established between the two armies in conflict for the control of Chernarus. The Redfor Coalition appears strongest than it was and the Blue Alliance is very determined in pushing back those who they call “invaders”. Tonight the Blue Coalition will have a party to celebrate the last day of quiet. As soon as the truce is expired, the Redfor will attack …

Arma Tactical Combat ATC ATC2 ATC3 ATC4 ATC5 ATC6 ATC7
We use cookies to ensure that we give you the best experience on our website. If you continue to use this site we will assume that you are happy with it.Ok