The sixth battle took place in the region of Winsen. It was again a very good battle, uncertain till the end. The sector of Walle was under pressure all the time, and the sector of Winsen was taken soon by the Redfor, lost and recaptured several time by the Blufor Coalition. At the end two sectors were in Blufor hands, while Walle remained red. Blufor now counterattack, and they will try to conquer the region of Lutterloh. The second battle of Lutterloh will take place on Feb. 13th. Again, a fierce fight is expected! Good luck all!! 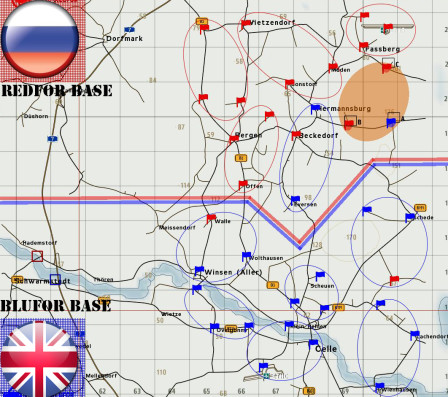 The theatre of the seventh battle

THE BATTLE OF PUSTA, FEBRUARY 9TH

A very hard battle for the control of the three sectors in the area of Pusta, Pusta, Pik Kozlova and Prigorodki.

Wednesday, 03 November 2010 01:17
The ATC Staff thanks the participants of the last scrim on October 27th.
We had a very nice battle, hope everyone enyojed!
Here is a […]

We welcome all teams enlisted for the upcoming 2010 Campaign

Invitations for the first Commander's Meeting […]