The seventh battle was fight in the region of Lutterloh. Again, it was a great battle, uncertain, fierce fightings were around all sectors. At the end, Blufor managed to conquer sector C and holding it trough the end. So the region of Lutterloh becomes blue, Redfor maintain possession of sector B. The eighth battle of the ATC5 campaign will take place on Wed. Feb. 20th at 20.00 GMT. Blufor will be attacking the Airport region (Fassberg, north east of the map). 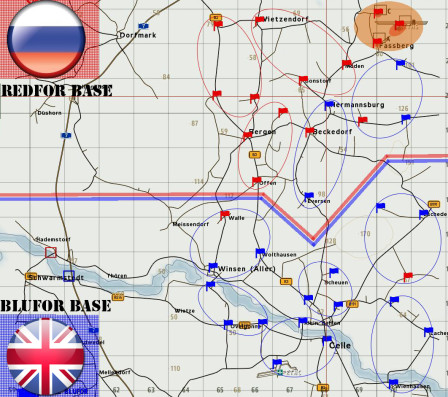 Here the theatre of the eighth battle

Thursday, 28 January 2010 14:21
After a calm period, seems that the situation in Chernarus is becoming hot again. The Russian coalition seems rebuilt, reinforcements are now available at the […]

Bastam was probably the most fighted and bloody battle of the campaign so far. After the successful defense of Bastam, the Redfor will attack the […]

I'm pleased to announce the eleventh battle of the ATC4 Campaign which will take place on April 4th at 19.30 GMT. The Redfor will attack […]