The battle of Zavarak of March 9th was the conclusive battle of the ATC3 Campaign Takistan Operations 2010-2011. Here a summary of the operations. We fighted eleventh battles, from Dec. 8th 2010 to March 9th 2011.

Battle of Garmsar, Jan. 26th – The Blufor attack Garmsar and secure the region.

Battle of Bastam, Feb. 2nd – The Blufor attack Bastam but the Redfor successfully defend the region.

Second battle of Garmsar, Feb. 9th – The Redfor counterattack on Garmsar and conquer the region.

Second battle of Garmarud, Feb. 16th – The Redfor attack Garmarud but are forced back.

Third battle of Garmsar, March 2nd – The Blufor maintain the initiative and conquer back Garmsar.

The final situation in Takistan 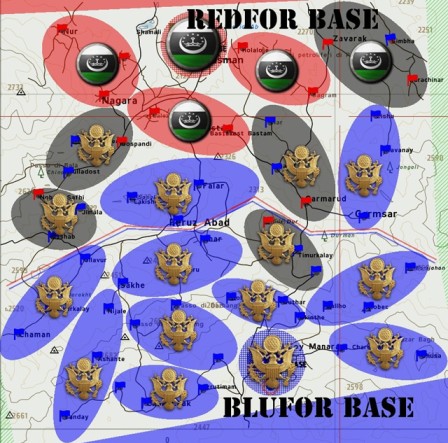 Friday, 24 December 2010 17:32
After agreements with the Team Leaders we decided to resume ATC Campaign full scale activities on Wednesday Jan. 5th, 2011 with the Blufor attacking Feruz […]

The outcome of the Garmarud battle on Feb. 16th was a victory for Blufor, with the sectors of Imarat and Nar in their hands, while […]

Saturday, 27 March 2010 00:21
Redfor attack Pustoshka for the second time, ingent movement of troops reported. The russian-lead forces try advancing in depth in Chernarus and to push back […]