A harsh, intense battle, uncertain through the very end! Blufor manage to defend the Lutterloh region, which remains in Blufor hands. Sector B was captured early by Blufor, then lost and recaptured several times, but at the end sector B is blue. Sector A was never captured by Redfor, while sector C was captured by Red forces and Blufor could not manage to reconquer it. So the final outcome is that the Lutterloh region remains blue and Blufor regain the initiative.

Battle #10 will take place on Wednesday March 6th at 20.00 GMT. The Blufor will attack the Bergen region. Again, we expect a fierce fighting trough the end! Good luck all! 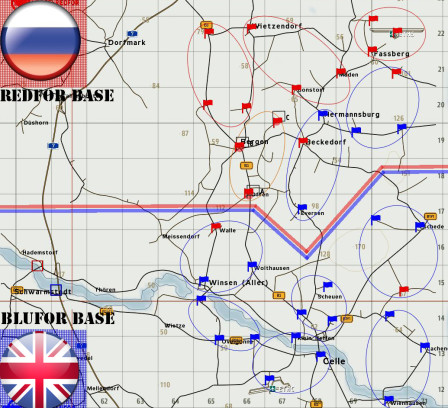 The theatre of the tenth battle

The Russian assault on Mogilevka failed, the Bluefor could hold out against the heavy attacks of the Russian coalition

After that, the Russian offensive lost […]

Friday, 26 November 2010 20:50
After the Team Leaders Meeting on Thursday Nov. 25th I am pleased to announce we decided a date for the campaign kickoff, Wednesday Dec. 8th.
[…]