The ninth battle of the ATC4 Campaign has been a very interesting and fighted one. The Blufor were attaching the region of Mogilevka, Vyshnoye and Zub. The Redfor had at beginning the control over Mogilevka and Vyshnoye. The Blufor succedeed in capturing Mogilevka but the Redfor responded by capturing Zub, then the castle was theatre of harsh fighting and changed ownership some times. The Blufor however succeeded in holding Mogilevka and Zub through the end. A great battle again, thanks to all players from both sides!

The tenth battle will be in the sectors of Staroye-Msta-Rag on Wednesday March 28th. Blufor will be attacking.

Due to daylight saving time (DST) or summer time adopted in many european countries, the UTC/GMT/zulu time for ATC battles is changed to 19.30 GMT, this will permit to have the same local time for battles for most of us.

Good luck everybody and we expect again a great battle and a lot of fight and fun! 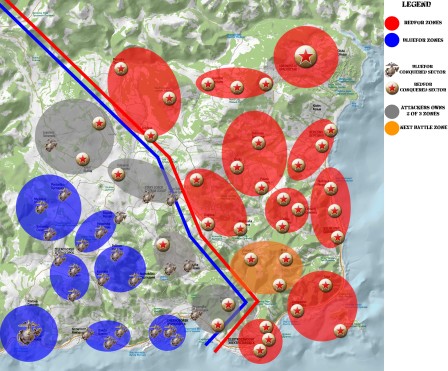 The situation in Chernarus after the ninth battle. In orange, the theatre of the tenth battle

Thursday, 14 February 2013 15:52
The seventh battle was fight in the region of Lutterloh. Again, it was a great battle, uncertain, fierce fightings were around all sectors. At the […]

I'm pleased to announce the fourteenth ATC4 Campaign battle. The Redfor side will attack the sectors of Rogovo, Pogorevka and Green Mountain.
As agreed with […]